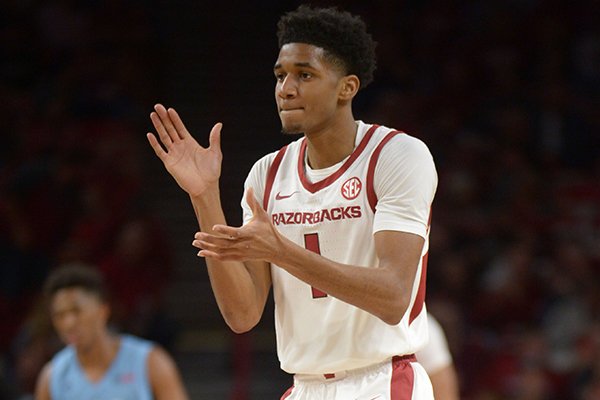 Arkansas heads to Columbia, South Carolina to face the Gamecocks for the first time this season. If you look at their record, it shows they are 11-11 overall but don’t mistake them for an easy out. The Gamecocks are 6-3 overall in the SEC and have beaten teams that looked to finish in the top half of the SEC in Auburn, Mississippi State and Florida.
Led by senior forward, Chris Silva (6’9 234), he leads the team with 13.6 points and 7 rebounds a contest. Silva is the leader of the team and helps the Gamecocks in formidable frontcourt that has done plenty of damage in the SEC so far. Freshman guard, A.J. Lawson, has been an outstanding, too. He averages 13 points and 4 rebounds a game. Stopping these two will be imperative if the Razorbacks want to continue their hot streak in SEC play.
South Carolina ranks 157th overall in the NCAA only scoring 74 points per game but only average 71 in SEC play. They are shooting 45% in conference play but are also allowing 43% to their opponents. They ranks 12th in the SEC ok three point made field goals per game but they make up with that by getting to the free throw line the second most times in the SEC. That definitely benefits the Gamecocks today. Arkansas fouled their SEC opponents 197 times this season which is second in the SEC.
Arkansas needs to rebound well against a tall and physical Gamecock squad. The second key is to feed Gafford. He has proven against every opponent that he demands the ball and can do something with it in a drought like no other Razorback can. My final key to the game is to drive to the basket. The Gamecocks are a physical team but to beat them, the Hogs must be physical themselves.
Who wins today? ARKANSAS wins 67-53 in a game where they have to leak out late with free throws. The Razorbacks pick their fifth straight SEC game to improve to 15-8 on the season.

Another Razorback Transferring from Arkansas

Be Careful Who You Fire

Keys and Predictions Hogs vs ‘Dores