Chad Morris was hired. Morris promised a lot but was most notably a quote maker early on in his tenure. With “Left Lane Hammer Down”, “Full Tilt Boogie” and “If you don’t have speed you’re chasing speed”. If you watched during the last two seasons of the Bielema tenure there was not much speed, players were too overweight and out of shape. Yes, they lost a lot of weight during last offseason but lost weight does not always mean gaining quickness or speed and it showed. There are some players with speed do not get me wrong there is not enough team speed to make a difference in the speedy SEC. Coach did not promise anything to happen in 2018 even though fans will hold “4-8 is unacceptable” when the Hogs finished 2-10 this season when he said it was “unacceptable”. He was sick of the team come the Mississippi State game when afterwards he said the game was, “Disappointed. Disgusted. Unacceptable.” That is howMorris described the effort of coaching and his players after the game.
If Arkansas wants to get better they have to start by winning games at home.
Arkansas home record 1998-2011: 79-21 79%
2011 7-0 505 yds 40 ppg
2010 7-0 499 yds 34 ppg
2009 6-1 498 yds 46 ppg
2008 4-3 398 yds 22 ppg
2007 6-2 475 yds 41 ppg
2006 7-2 387 yds 27 ppg
2005 3-3 413 yds 31 ppg
2004 5-3 412 yds 28 ppg
2003 5-2 450 yds 38 ppg
2002 6-2 369 yds 28 ppg
2001 6-1 286 yds, 23 ppg
2000 5-2 355 yds, 28 ppg
1999 6-0
1998 6-0
TOTAL: 79-21
Arkansas home record 2012-2018: 25-21 53%
2018 2-5 376 yds 29 ppg
2017 3-4 394 yds 31 ppg
2016 5-2 425 yds 31 ppg
2015 4-3 465 yds 39 ppg
2014 5-1 418 yds 38 ppg
2013 3-4 388 yds 25 ppg
2012 3-3 428 yds 28 ppg
TOTAL: 25-22
QB recruiting: K.J. Jefferson will be the future at quarterback for Arkansas. He is tall enough (6’4) to see over the offensive line and see his targets much better than a guy who is under 6’2. At 215 pounds, Jefferson will have the weight and body frame to take on the physicality it takes to run the RPO offense. Jefferson was names 2018 Mr. Football in the state of Mississippi, lead his team North Panola deep into the playoffs, set the school career and single season passing records as well with 9564 yards and 119 total touchdowns and only 25 interceptions in his career. He rushed for 2922 yards and 24 touchdowns in his career, too. Jefferson is a true dual threat and one who could potentially lead Arkansas back to the promised land with his superstar receiving core.
Another big recruiting factor that could accelerate the football program under Chad Morris is landing prized graduate transfer, Kelly Bryant. He is a 6’3 225 dual threat quarterback looking to spend his last college season auditioning for the NFL. This would be a win-win situation for the Hogs and it could lead the Razorbacks to more wins and could help with name recognition among recruits. If Bryant comes in and helps immediately it will make a difference to make Arkansas an attractive place for kids to come play more ball. At Clemson, Bryant finished 2017 with 3600 total yards of offense and 24 touchdowns in the virtually same offense that Arkansas runs. Bryant would essentially be the boost the Hogs need to be a threat in the SEC again.
RB: Recruiting: A’Monte Spivey is a good looking running back at 6’2 210. A tall frame but runs great behind his pads. He is a guy that runs hard on every down and if he adds a little to his frame, Spivey could be a problem for SEC defenses. Spivey is the first running back being brought in by head coach Chad Morris. Recently though, he gained an offer from Ole Miss but told fans not to worry because he would not waiver from his commitment as a Hog. Another running back to watch out for if something were to happen with Spivey is Ivory Winters who is currently an Indiana commit. Winters is 5’11 205 but has the speed to elude defenders and catches the ball out of the backfield with ease. Watch out for him.
WR Recruiting: Trey Knox, Treylon Burks, Shamar Nash, TQ Jackson and tight end, Hudson Henry will be Arkansas’ best crop of receivers in 10 years to come in the UofA. Knox provides you with plenty of height to go after those 50/50 balls in the air.

Knox could be the guy that gives Arkansas an advantage in close games near the goal line. His decision came down to Arkansas and Tennessee but as soon as he knew the momentum was in Arkansas’ favor they started to dismiss him like they thought they did not need him because of his lack of speed. Forget it, Knox can ball out and has the speed to elude defenders with his 6’5 215 frame. Here is his tape:

Burks has a bigger frame, too. At 6’4 225 and speed to kill, he could be another matchup problem especially with skinny routes, quick cuts, drag routes and slants. Burks is a man among boys at 4A Warren High School. As a junior in 2017, he singlehandedly dismantled his competition and one could see him play quarterback, running back, wide receiver, safety and return man in any given game. He is a once in a generation talent in Arkansas and the Razorbacks are glad to have gained his verbal commitment. 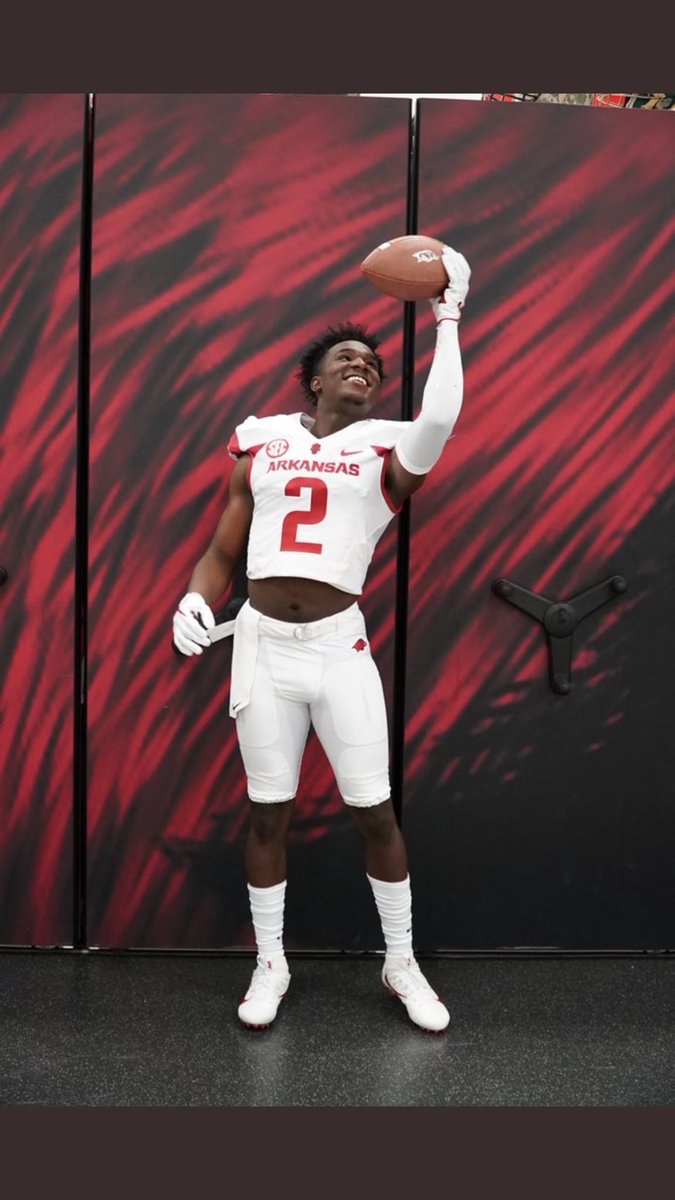 Nash has the ability to be another elite wide receiver at Arkansas. At 6’3 180 he has the height to go after a 50/50 ball as well but has the speed to take short screens for touchdowns and long gains. He is an elite talent that runs crisp routes, watches the ball in the air and knows where he is positioned on the field at all times. Nash will be burning SEC defenses his freshman year.
The most underrated wide receiver in the 2019 class is also committed to Arkansas, (No bias…watch his tape). He starred on his Jefferson (TX) High School team as a do-it-all type of athlete.

Jackson has elite vision and can find the hole immediately like a running back, he sees the field on returns like a Joe Adams, Dennis Johnson and Felix Jones at returner, hardly drops passes like a Peyton Hillis and he also has the speed, agility and quickness to elude defenders. Hog fans, TQ Jackson will have a highlight reel like Michael Qualls by the time his Razorback career will be over. Here is to the next four years for “The Greatest Wide Receiver Class In Razorback History’!
Do NOT forget about the best player in Arkansas either with Hudson Henry. 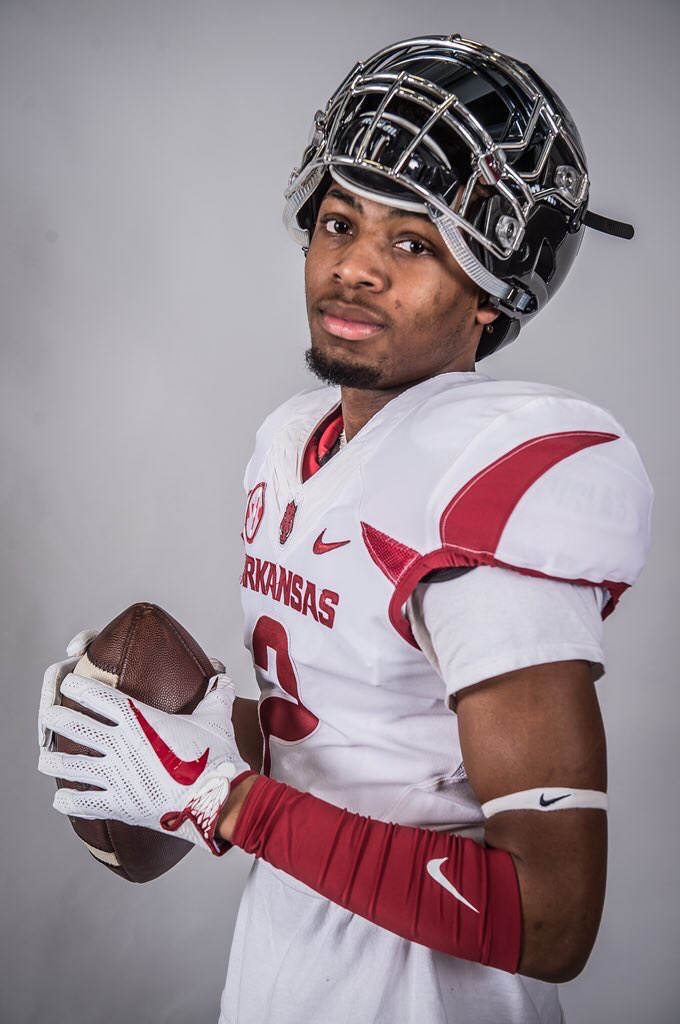 Malik Chavis (6’2 190) signed on. Two defensive backs with great speed would not make the only difference. Then, Adonis Otey makes his verbal commitment to Arkansas (considers himself an athlete). He is a taller corner that is why we have him projected to stay there, to be more effective versus the taller wide receivers that SEC teams boast. Devin Bush was a huge deal maker as the Hogs signed him on as the highest rated defensive back in the 2019 class. If Arkansas can add Greg Brooks, Jr, the Hogs secondary will be lit with Ryan Pulley possibly coming back with Kam Curl, Joe Foucha, Myles Mason and Buster Brown. This class has all the pieces but could be a very good but young secondary in 2019.
Players of the Year: Rakeem Boyd 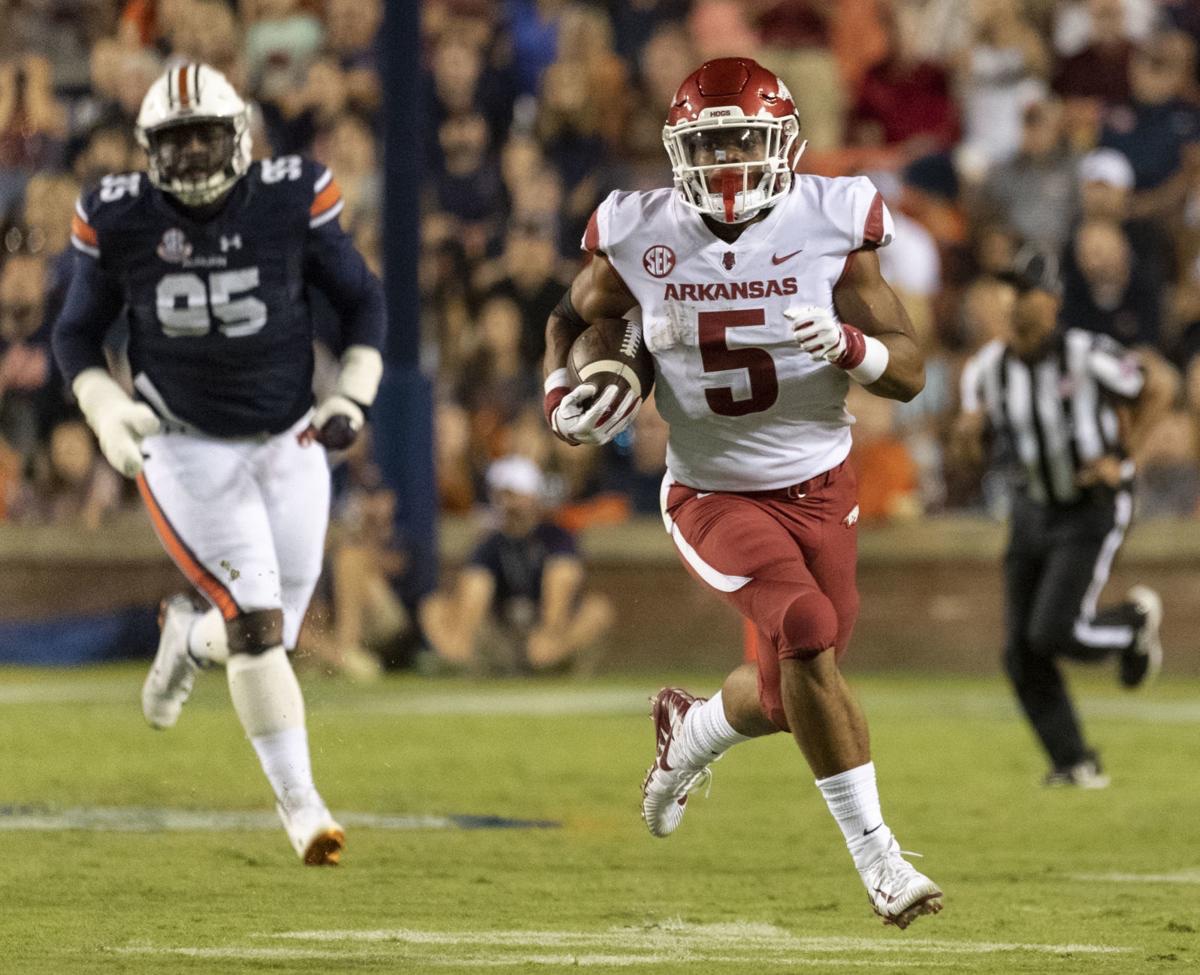 How can you not add Rakeem “The Dream” Boyd as the player of the year for the Hogs. When they needed a big play offensively, you could call on “5” and he would give you what you needed. He stayed hurt a lot down the stretch but Arkansas depended on him so much that it wore him down. If he can stay healthy in 2019, 1000 All-purpose yardage will be manageable. (Finished with 999 this season). Here is your Star In the Making: http://youtu.be/JcyvP1ituWQ?a
Top Plays of 2018:
-Rakeem Boyd vs Alabama

-TJ Hammonds takes it to the house vs CSU

Leader: Ty Storey 143/250 57.2% 11TD 10INT
Through the middle portion of the season, the only time the Hogs offense was rolling was when Storey was on the field. Before exiting the Ole Miss game due to injury, Storey was a very good 13-17 passing. After that, his passing became somewhat erratic, much like the Brandon Allen injury in 2013.
1721 rushing, 143 per game (13th SEC)
Leader: Rakeem Boyd 123 carries 734 yds 2td
Leading Receiver: La’Michael Pettway
30 rec 499 yds, 16.6 yards per rec, 4td
Leading Tackler:
De’Jon Harris 118 tackles, 2 sacks, 9TFL, 1 FF
Santos Ramirez: 87 tackles
Dre Greenlaw: 80 tackles, 6.5 TFL, 2 sacks, 2 INT
What are the Hogs going to do next season? Will Kelly Bryant call the Hogs tonight at 6 PM? Will this class be as good as advertised? Will Arkansas make an improvement in the win column next season? If the Razorbacks have another disappointing season, how hot will Morris’ seat be? None of us can answer that question but I guarantee you the 2019 version of the Arkansas Razorbacks will be much improved and ready to prove themselves as bowl contenders.
Well, here is their schedule and here are our projections going into next season. In bold is best case scenario and in italics will be how I really feel the season will go.
8-31: Portland State W W
9-7: @ Ole Miss W L
9-14: Colorado State W W
9-21: San Jose State W W
9-28: Texas A&M (Southwest Classic AT&T Stadium) L L
10-12: @ Kentucky L L
10-19: Auburn W L
10-26: @Alabama L L
11-2: Mississippi State W W
11-9: Western Kentucky W W
11-23: @LSU L L
11-30: Missouri (War Memorial: Battle Line Rivalry) W W
Does 2-10 to 8-4 sound reasonable? I’m not sure but four winnable non-conference games looks attainable and there are four winnable games within the conference. Anything is possible but I really think Arkansas will win six and head to a bowl game for the first time since 2016. I think bowl eligibility is the goal in the second season under Chad Morris.
Thank you for reading our post-season review and hope that you enjoyed. On to a full court press on basketball coverage!

Arkansas’ Staff Burnin’ the Roads Up

Catalon To The Hogs!