There are reasons I can understand for Razorback fans to be mad. Whether it be the play calling, quarterback situation, the lax defense or whatever it be Hog fans should be upset with the outcome. So are the coaches, their assistants and players. The Razorbacks somehow blew a 27-9 lead in the third quarter and Colorado State took advantage of the momentum and never looked back. Frustration came for Hog fans after the Missouri game in 2016 but has apathy now set in for the Razorback faithful as well? It should not and I will tell you why.

I was reluctant the past week to say it but this is a Razorback team that lacks speed being coached by a man who is obsessed with speed. There are a few players sprinkled throughout the roster but there is not enough of them to make a substantial difference to close the gap on the upper half of the SEC West.
This group of Razorbacks still expect the worst to happen. The seniors like Santos Ramirez, Hjalte Froholdt, Armon Watts, Ryan Pulley and Jared Cornelius have all seen it happen. Epic meltdowns to Texas A&M, Mississippi State, Toledo, Texas Tech, Auburn, South Carolina and even the Rutgers game for Kevin Richardson. The Hogs are conditioned to losing and this does not get fixed over night. The Morris system that has a proven track record of success at every stop is just in its second game. The hurt will come early but the Hogs will not be losers for long.
Lastly, Arkansas’ players lack the ability to execute what the coaches want them to do offensively and defensively. Truth be told, the 2018 Razorback football team are round pegs trying to fit into a square hole. It happened in 2008 with change in philosophy under Bobby Petrino. The same thing happened in 2013 under Bret Bielema. The Hogs have two guys who can partly execute what they are asked to do and they are Devwah Whaley and T.J. Hammonds. 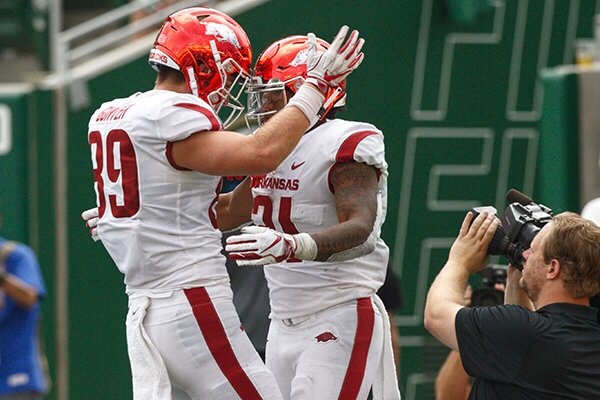 They combined for over 225 combined yards. That should have been enough to win against any opponent but it was not today. Defensively, they have one guy that is a capable pass rusher and Agim is mostly double teamed every play. I understand if Arkansas had gone up 31-9 and letting off the gas but they did not. The coaching staff had too many inexperienced players out there while also playing “bend don’t break” defense which I believe ultimately lost Arkansas the ball game. This Razorback team does not lack talent but the talent they have does not match the style the new coaching staff is installing.
In the end, Arkansas lost this one 34-27. It was shades of the 2013 Rutgers game. The loss should leave a bad taste in the mouth of the coaches, players and fans alike. Losing football is not the expectation for the fans and they will let you know it. This will not be a losing brand of football for long. Take the 2019 recruiting class which sits in the top 20 nationally and you will realize help will be on the way.
Rebuilding a program takes time and Chad Morris will lay a solid foundation down in 2018 and build off of it for the years to come. There are ten games left in the season. Ten more games to call the Hogs. Ten more games to watch the team improve. Ten more games to enjoy the greatest season every year because the season will be gone before you know it. Razorback fan or any fan for that matter, do not let your happiness be dependent on the outcome of a game played by 18-22 year old men.
That is a wrap for tonight. We appreciate you following The Hog Pen Facebook and Twitter accounts for our live in-game analysis during the game. Klayton and Carson are doing a good job for us! Thank you for your support and Go Hogs!

Recruiting Report: Sunny with a chance of some flips

On the Trail: Dylan Rathcke

1 thought on “No Clutch Popping In Colorado: Postgame Analysis”